Here's the web link to the race: Great Urban Race

My brother Phil is the reason that this race was  added to my calendar this year.  He met some folks that were top notch clue solvers for this type of race.  After clue solving with them a couple of times, they offered their support if he decided to race.  And, so it was.  Phil gave me the gift of a race entry for Christmas and we were all set to race the Great Urban Race in Chicago!

The July morning in Chicago was unseasonably cold, which was great because the race started at high noon!  We arrived with plenty of time to spare and decided to hang out at the Cubby Bear and wait for the race to begin.  We were joined by our friend Jeff, who acted as ground support during the race.
At noon, the clue sheets were handed out and we were on our way.  We had pre-planned to jump on the train, head south and have some clue solutions fed our way as we were on the move.  We hopped on the red line at Addison and begin chattering on the phone.  As we came to the first stop we looked up and saw Sheridan - crap!  We went North instead of South.  After switching platforms and trains, we were on our way to the Near North Side.

The first stop was at a volunteer station manned by C.A.R.A. (the Chicago Area Runner's Association)  We answered some easy questions about running in Chicago, grabbed the provided flyer, and snapped a picture with the banner.  One down!

Next, we were directed to the pier at North Avenue Beach behind Castaways Bar for something Polynesian.  This turned out to be my introduction to SUP - stand up paddling.  They were allowing the teams to paddle on their knees, so that wasn't so bad until I reached the turn around buoy and took an impromptu swim.  Thanks unseasonably cold Chicago weather!  A hand stamp this time, followed by a skyline picture and my wet body and sandy feet were on the run!  I think Phil just chuckled.

From there it was a mad dash to a bar with a retractable roof beer garden on Well's street.  I wish we'd had longer to stick around because the place looked like it was hopping - even for noon on a Saturday!  We had a challenge involving a blindfold and instructions from the other teammate that seemed to go pretty well.  Phil was blindfolded while I provided instructions.  Our progress was monitored by the Bacardi Oakhart (new rum to compete with Captain Morgan) girls.  Like I said, might not have been a bad place to hang around...

Each GUR has a donation checkpoint.  This one was no exception.  We met Jeff, made our donation and also knocked off a few squares to solve the Tic Tac Toe Square.
For those keeping score, we now have 4 checkpoints (out of 11) and have also completed the TicTacToe square for checkpoint #5.  Almost halfway done!  Back to the Brown Line train now to make our way North.  It should be noted that this checkpoint was as far south as we were headed for the day.  Had we caught the original train going south, we might have overshot in the subway with no phone reception and really ended up off-course.

After scooting down the brown line, we hopped off and headed to another bar.  This one required knocking an inverted bottle cap off of a beer bottle with a golf ball while landing the golf ball on the mouth of the beer bottle.  Yes, it can be done.  No, it isn't easy.  We snapped a quick picture under a neon sign (clue requirement) and headed out the door.  The picture was pretty fuzzy, so I've left it out of this post.

From there, we high tailed it to a painting challenge.  The shop was called Bottles and Botega.  I think that it is one of those shops where you bring wine and paint.  We were required to paint a square in a canvas - we knocked this out very quickly and headed down the street to the next challenge.

#6,#7, and now #8 were falling quickly.  We headed to our next challenge that involved passing coffee beans between plastic spoons held in our mouths.  There are certain things that two grown men really shouldn't do.  We moved our 10 coffee beans from bowl to bowl, grabbed a flyer, snapped a picture and were off on a sprint to get back on the train.

Last stop to knock off three more clues.  We jumped off the Brown Line at Montrose and headed to the Chicago Swordplay Academy.  Oh, this will be fun!  We had three separate sword/ martial arts challenges to complete before getting our picture and heading to the next checkpoint.  It was good to get out a little aggression here!

The next stop was about 1/4 mile away at the Sweet Sensations Cupcake shop.  One teammate had to smear frosting on his nose, while the other had to pitch mini marshmallows from 15 feet away and try to get them to stick to the frosting.  Phil nailed me with the marshmallow on the first try!  We snapped our pic next to the giant cupcake and headed for the last clue!

Last clue - we are rocking now!! The last clue is right next to the train station and is an easy one for a beer expert like Phil.  We had to make our own beer - ok, an abbreviated version.  We had to add a pinch of yeast, some barley and some hops to water, cap the bottle and take a picture with our home brew.
We did it!  We've solved eleven clues.  All that's left now is to get to the finish line and see where we placed.  The Brown line does stop at Addison, but then there'd be a one mile run on tired legs to finish the day.  However, as we stepped off the train, the bus heading down Addison was right outside the door!  We sprinted to the next bus stop and enjoyed a leisurely bus ride back to Clark and Addison.

We ran through the finish chute and headed to camera check.  We had everything we needed and finished with no penalties!  We were the third place team overall!! YES, OVERALL!!  We came back later for the awards ceremony and received our giant novelty check!!  Check it out!!

For winning the race, we receive a complimentary entry to the National Championship Race in Puerto Rico in December.  Stand by for updates!!

A HUGE thanks goes out to all who supported our team and made this possible!  The results are linked here. 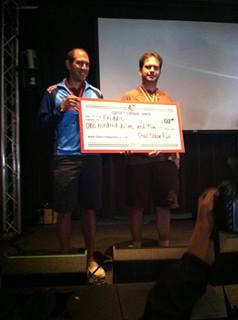 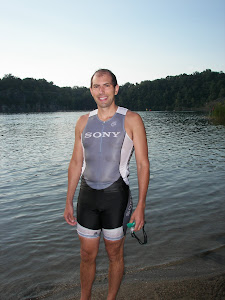